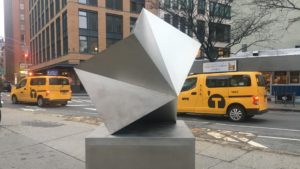 The sculpture Compostela Fractal Study of a Shell is based on origami studies and is composed of broken steel planes that cause the sculpture to change or live with sunlight. It reflects in an abstract way the fractal system of matter, looking for a simplicity that reflects the interior of every being. It is a work inspired in the study of the nature, in particular of a shell: the volume is reduced to its fractal structure, to its geometry.

Manuel Ferreiro Badía was born in the city of La Coruña in 1944. His work covers the various fields of artistic creation such as sculpture, painting, medal, ceramics or design. He stands out mainly for his sculptural creation, including medalistics, which has led him to win important awards and to be represented in various museums and institutions, both national and international. In 1985 he won the Tomás Francisco Prieto First Prize of the National Factory of Currency and Bell, one of the most important European medal awards, for his work Perceptions.