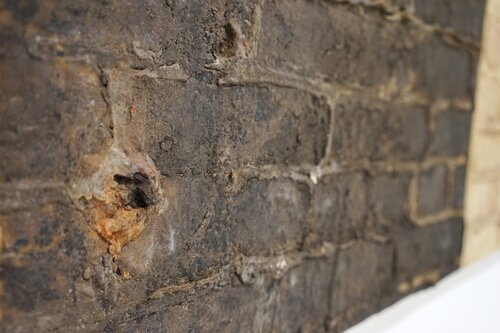 Distributed Monuments is an exhibition of new works on canvas presenting dust extracted from two historic sites: the Old U.S. Mint in San Francisco and the Lyndhurst Mansion in Tarrytown, New York. Like two sides of a coin, they show distinctive yet interconnected remains of America’s Gilded Age. The casts from the Old U.S. Mint capture a century and a half of soot accumulated on the chimneys used to mint coins from the California Gold Rush, the pollution from which has remained an otherwise invisible material. The casts from the Lyndhurst Mansion present a century of water damage that turned the pool building of the estate, once a playground for one of America’s richest families, into a ruin.

Otero-Pailos draws from his formal training in architecture and preservation to create artworks that address themes of memory, history and transition, inviting the viewer to consider monuments as powerful agents for cultural connection, questioning and understanding. He employs the material residues of our modernity – including airborne atmospheric dust, waterways, traces of sweat and body sounds, maps, even embassy security fences, to render their invisible meanings visible. Notably, he has used experimental preservation cleaning techniques designed to restore landmarked buildings, as well as reenactment methodologies, as part of his creative proce

Taken together the casts reveal not only the embedded material realities of the site, but also the connected histories of labor, migration, resource extraction, industrialization, global capitalism and its environmental impact. The installation enables a dialogue with and across time, provoking new understandings about – and a deeper
sense of accountability for – our shared existence.