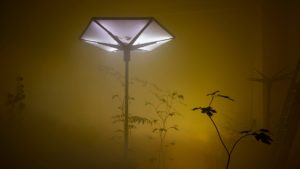 Like a strange dream that seems to go on forever, The Awakening reanimates a building whose life appears to have expired long ago. Through an immersive installation comprised of fragments that make up the body of a building, a forgotten edifice is reactivated to provoke speculative thought about its past and future.

In this exhibition in one scene, artist Alvaro Urbano (Madrid, 1983) uses as a case study the celebrated Hexagon Pavilion, designed by architects José Antonio Corrales and Ramón Vázquez Molezún. The building, now languishing in a ruinous state in Madrid’s Casa de Campo park, was first presented as the Spanish Pavilion at the 1958 Brussels World’s Fair and is considered an important example of modern Spanish architecture. After years of abandonment, it is hard to believe what it once was and what it contained.

Here, where the architecture and vegetation seem to be frozen in time, where the building itself holds a pictorial and sonic landscape that speaks of the past experiences lived within its walls, and where a pair of raccoons intermittently dwells—an endless twilight bathes the space in color and brings it to life.

Like an unscripted film that captures daily existence, The Awakening constructs a parallel life for an exhausted building in order to revive seemingly dormant histories.

Alvaro Urbano (Spain, 1983) lives and works in Berlin. He studied at the Escuela Técnica Superior de Madrid (ETSAM) and the Institut für Raumexperimente of the Universität der Künste in Berlin. He is currently a professor at the École Nationale Supérieure des Beaux-Arts in Paris. In 2014 Urbano received the Villa Romana Prize. His work has been shown in different institutions and organizations such as Storefront for Art and Architecture, New York (upcoming); Bundeskunsthalle, Bonn; Hamburger Bahnhof, Berlin; Neue Nationalgalerie, Berlin; Kunsthalle Düsseldorf; Art Basel Statements with ChertLüdde; among many others.