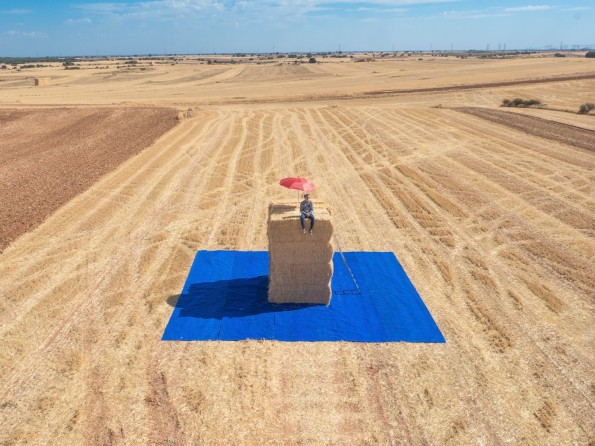 Trained as a civil engineer and with an outstanding career as an urban artist, Rubén Martín de Lucas (Madrid, 1977) has directed his latest works towards a research focus that, under the heading Landscape and associated behavior, refects on the emergence of problems derived from the growth of the world population and its distribution. Demographics have been one of the most important agents of the contemporary world´s transformation and they are analyzed by the artist as a starting point to refect on migratory fows, the expression of borders, the tension between the global and the local, the ¨depauperization¨ of life systems and the exploitation of natural resources.

Structured through different series, Martin de Lucas’ recent work is modulated by great doses of irony based on simulating and exposing the unsustainable staging of distinct conficts: his series Stupid Borders replicates social models structured around borders that operate under the idea of belonging to a territory and fear of the other. The series Genesis 1.28 highlights our inability to establish demographic dynamics capable of balancing resources and the advancement of humanity; and his last series, grouped under the title La traza vacía (The Empty Trace), presents bleak maps that warn of the necessity of fnding new forms of relations with the biosphere that do not attack our own existence. Geometric order and stability have a recurring presence in these works. The impassable appearance of square, circular and triangular territories accentuate the contrast with the fuctuating dynamics of migration processes and demographic growth. In this sense, Martin de Lucas refects on the failure of attempts to standardize, colonize, deny or suppress those dissonant spatial manifestations that seek to establish maps distinct from those imposed by normative models and mechanisms of social control.