WASHINGTON. Luzinterruptus “La Cascada” 16 may – 27 september 2019. Fair Water: A Right of All program. Former Residence of the Ambassadors of Spain.

WASHINGTON. Luzinterruptus “La Cascada” 16 may – 27 september 2019. Fair Water: A Right of All program. Former Residence of the Ambassadors of Spain. 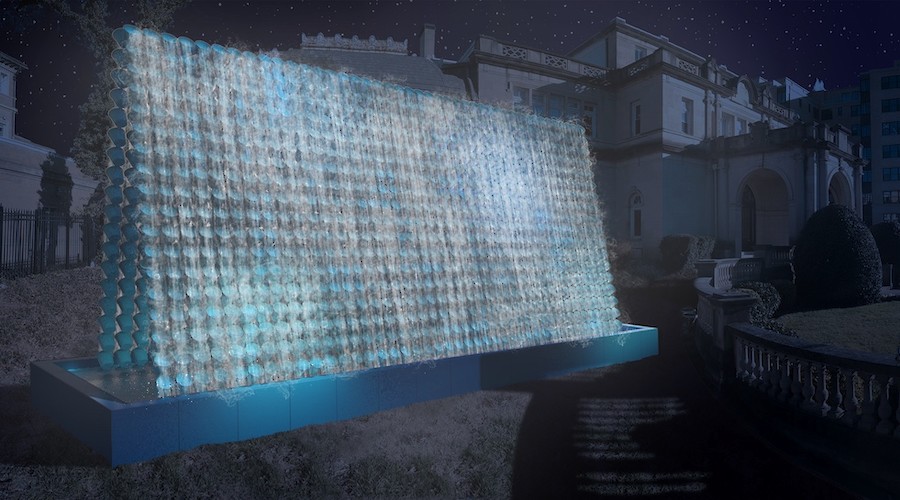 Almost a thousand of recycled plastic buckets are turned into a waterfall in a large-scale art installation by Spanish anonymous collective Luzinterruptus.

As part of the Fair Water: A Right of All program, Spain-based art collective Luzinterruptus displays La Cascada, a thirteen-foot high and thirty-foot long art installation made with almost a thousand recycled plastic buckets.

The work, which will be on display at the joint front lawn on 16th street, is inspired by the human right to safe drinking water and sanitation, and aims to present the reality of water scarcity and the struggle to access safe drinking water through one of the most common elements used by every culture to “go and fetch water.”

Luzinterruptus is an anonymous artistic group, who carries out urban interventions in public spaces. Luzinterruptus uses light as a raw material and the dark as a canvas. The two members of the team come from different disciplines and apply their creativity to display lights around the city.

Luzinterruptus began to act on the streets of Madrid at the end of 2008. Their idea was to use light to reveal problems that seem to go unnoticed to the authorities and citizens. The artistic group also want to embellish or highlight anonymous places or corners that seem special, as well as objects with extraordinary artistic value that have been left on the streets for unknown reasons. (spainculture.us press-release)