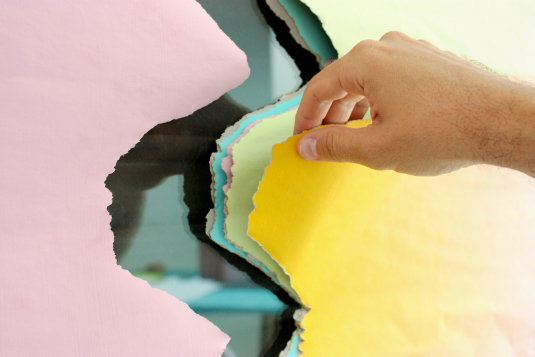 Guillermo Mora lives and works in Madrid, Spain, and is one of the most accomplished artists of his generation. In recent years, he has created a particular visual vocabulary in which formal elements like color gradients, layers, textures and shapes are used to create an abstract mode of communication. Mora’s stimulating compositions create environments through which the artist questions the protocols and procedures of contemporary painting as well as the structure of museums and collections.

The artist fantasizes about the idea of disrupting the politics of spectatorship. He aims to upend “museum behavior” — the way in which we learn to walk, talk and move inside museums — and the strong legacy of viewing large-scale, classical painting in museums influencing how we see art today. Mora imagines a scenario in which the traditional art-spectator relationship is reversed. He proposes that it is the artwork that moves back and forth to analyze us with paintings that act like creatures. Bright colors and gradients appear to seduce but also entrap the viewer. Departing from this fictional premise, Mora has created the exhibition “Now, Soon, Then, Tomorrow,” featuring four site-specific installations commissioned by the SCAD Museum of Art that transform each of the museum’s Jewel Boxes into abstract, layered dioramas. Demarking the space’s different planes, Mora’s intervention plays in and out of the spaces, creating volumes and layers, each one with a different set of elements and colors.

The title of the show is used to suggest two modes of time, one that is specific and one that is undetermined. Also, these words could be regarded as deictic expressions, terms like “now” or “soon,” words whose meaning is conditioned to a changing context. By using such allusions, the artist points to the multiplicity of ways to perceive his work, as it can simultaneously appear flat or multilayered depending on the point of view or the viewer.

Continuing with his interest to challenge the nature and current state of artistic disciplines, in “Now, Soon, Then, Tomorrow,” Mora playfully intervenes the space, as well as he presents an inventive, almost surreal, conception of contemporary painting.

Guillermo Mora earned his B.F.A. from the Complutense University of Madrid and the School of Art Institute of Chicago, and completed his Ph.D. thanks to a grant from La Caixa Foundation. Mora was featured in “100 Painters of Tomorrow” by Thames & Hudson, awarded the Audemars Piguet Award in 2013, received a scholarship at the International Studio & Curatorial Program, New York in 2016, and a fellowship from the Spanish Academy in Rome in 2010–11. His exhibitions include “El escritorio circular” with Teresa Solar, Centre d’art la Panera, Lleida, Spain; “Cae el cielo,” ECCO, Cádiz, Spain; “El año que no crecí,” Formatocomodo Gallery, Madrid; “No A Trio A” with Pia Camil, La Casa Encendida, “Madridand Viaje Largo con un Extraño,” Casa Triângulo Gallery, São Paulo. Mora’s work is part of the Museum Voorlinden (Caldic Collection) and The Margulies Collection at the Warehouse. The exhibition is curated by Humberto Moro, curator of SCAD exhibitions. (SCAD press-release)