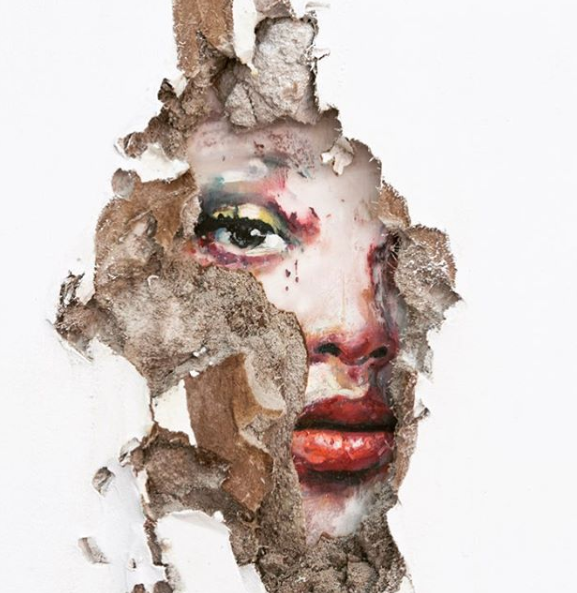 Palacios’ new work is not only focused on the already-inflicted violent action of the hurters. His new, more richly textured, almost sculptural paintings, stand as an invitation to the potential helpers who can actually do something about it. In his “Set Me Free” series, which will be featured prominently in Isolated, a solo exhibition opening at Next Street Gallery in Paris on September 27th, 2018, art emerges once more as our greatest catalyst for human evolution. Palacios’ new work cries out: “Tear down that wall!”

This new, considerably more three-dimensional series of mixed-media works of clear vinyl peeking out rather literally behind thick, rough, ruptured, chalky, emotive drywall, is a mighty evolutionary leap past his already gorgeous yet haunting “Wounds,” which will also be featured in Isolated, and happily so, as they are an essential chapter in the artist’s forward thinking, almost empathic narrative.

Born in Madrid in 1973, Juan Miguel Palacios began to paint at the early age of 6. After a long journey with many Art Professors and Fine Art Schools, at age 12 he joined the studio of the renowned Spanish painter Amadeo Roca Gisbert (a disciple of Joaquin Sorolla) for six years. During these years, he was educated and formed in strict academic training until he joined the Faculty of Fine Arts in Madrid in 1991.

When he completed his college degree in 1997, he founded the Laocoonte Art School of Madrid, where he combined mentoring and teaching with the development of his career as an artist and had successful exhibitions in cities across Spain and Europe. He also worked as a muralist, theater stenographer, and film posters painter during those years. Palacios now lives in New York