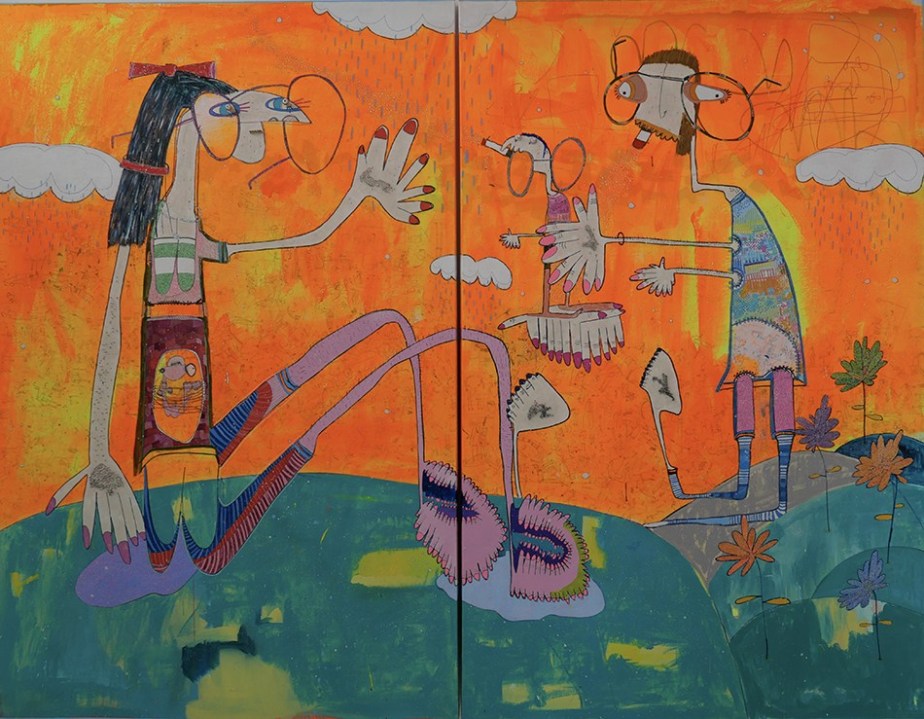 Each of Rafa Macarron’s pieces embody mysticism, invitation, and provocation. Characters with five thumbed hands are mixed with proper canon and proportion. A strange cyclops rests by the pool, chastened, defending his cave while the wisps of smoke that surround him constantly look for a way to break free to a place far away from the painting. Then, surrounded by water and mazes, dreamlike animals intersect with beings who raise their eyes to the sky. A lady under a parasol contemplates a ladder which always reaches the heavens—a senseless and illogical ceremony, elevated to a chromatic ecstasy.

Each painting is a manifesto of counter-culture. The art is seeking to transcend. Macarron explores the greatness of ordinary life and anchors in daily routines with images of chairs, showers, blow dryers, etc. By observing the characters in this setting, the spectator becomes a seeker and an explorer of his/her own inner self.

As a goldsmith and alchemist, Rafa’s process begins at his studio, from which rises seemingly impossible geometries. Everything there is traversed by the artist’s effort. He arrives at dawn, before the birds begin chirping, and reads in silence. As the morning moves forward, he draws, traces, and outlines with paper and pencil. When the sun reaches its zenith, color emerges. Materials battle against each other in order to disrupt the limits of the imagination and thus open new channels for the space. Then, creative silence.

Rafa’s studio windows give view to Madrid. His work and the city complement one another as they are both open, fruitful, free, and unapologetically themselves. Inside, the space is filled with philosophy books and spray cans. Macarron reads Wittgenstein’s ‘Tractatus Logico-Philosophicus’ with a fluorescent marker in hand. As the sun begins to set the twilight brings a new sense to the canvases. A colored line, texture, paper pulp, obsessive dots… all at the service of a leisure creator. Finally, the nighttime demands more silence in order for what Rafa calls “generous art:” art that does not justify itself to anyone, but to emerge. (gothamtogo press-release)