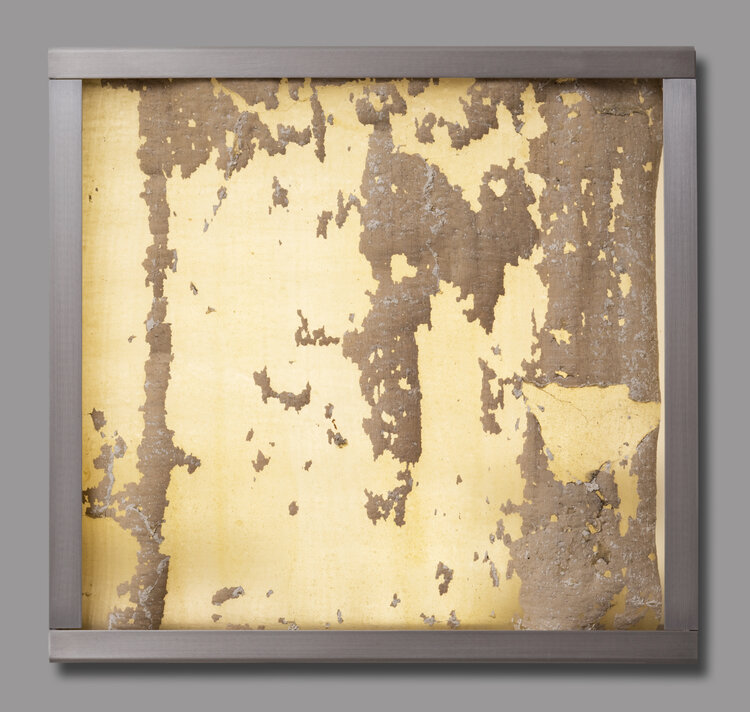 Nature’s Afterlives is the first shared exhibition of Gabriela Albergaria (Portugal/UK) and Jorge Otero-Pailos (Spain/US). This exhibition brings together two artists whose work focuses on Nature and the associated themes of growth and decay, history and memory, continuity and change. Albergaria’s large-scale drawings and photographs of forest vegetation expose in meticulous, meditative detail complex natural structures. From grooves of tree bark and stratified layers of stone, to carefully catalogued sequences of the colors within the lifecycle of a decomposing leaf, Albergaria’s work creates and represents manipulated environments that are both immersive and intimate. At the same time, Otero-Pailos’s work investigates the intersection of Nature and architecture. Using liquid latex as a form of building conservation technology, Otero-Pailos collects microscopic deposits of pollution in sheets of translucent rubber. Once removed from the building’s facade and displayed, these sheets function as memories in reverse, exposing to light decades of accumulated dust and the human interaction with, and impact on, the environment. Together, Albergaria and Otero-Pailos seek to engage the viewer in the pattern, rhythm, and materials of Nature. Both capture the process of time, the scientific cataloguing of nature’s activities, and the everyday interactions between humans and the environment. And in the vein of John Ruskin, the great nineteenth-century artist and critic whose 200th birthday is celebrated this year (2019), Albergaria and Otero-Pailos remind us that Ruskin’s proclamation that “if you can paint one leaf, you can paint the world” still rings true. Curated by Courtney Skipton Long, Ph.D. Assistant Curator of Prints and Drawings at the Yale Center for British Art.

Jorge Otero-Pailos (1971, Spain) is a New York-based artist and preservationist best known for making monumental casts of historically charged buildings. Drawing from his formal training in architecture and preservation, Otero-Pailos’ art practice deals with memory, culture, and transitions, and invites the viewer to consider buildings and functional objects as powerful agents of change. His site-specific series, The Ethics of Dust, is an ongoing, decade-long investigation resulting from cleaning dust and the residue of pollution from monuments such as the Doge’s Palace in Venice; Westminster Hall in the Houses of Parliament, London; the U.S. Old Mint in San Francisco; and Trajan’s Column at the Victoria & Albert Museum, London. Otero-Pailos’ works are to be found in the collections of SFMoMA, The Museum of London; The Ulster Museum, Belfast, Northern Ireland; The Whitworth, Manchester; The Glynn Vivian Art Gallery, Swansea; Kelvingrove / The People’s Palace, Glasgow; and Thyssen-Bornemisza Art Contemporary in Vienna.  He participated in the 53rd Venice Art Biennial (2009), and the Chicago Architecture Biennial (2017), among others.He is Director and Professor of Historic Preservation at the Columbia University Graduate School of Architecture in New York. He studied architecture at Cornell University and earned a doctorate in architecture at M.I.T.