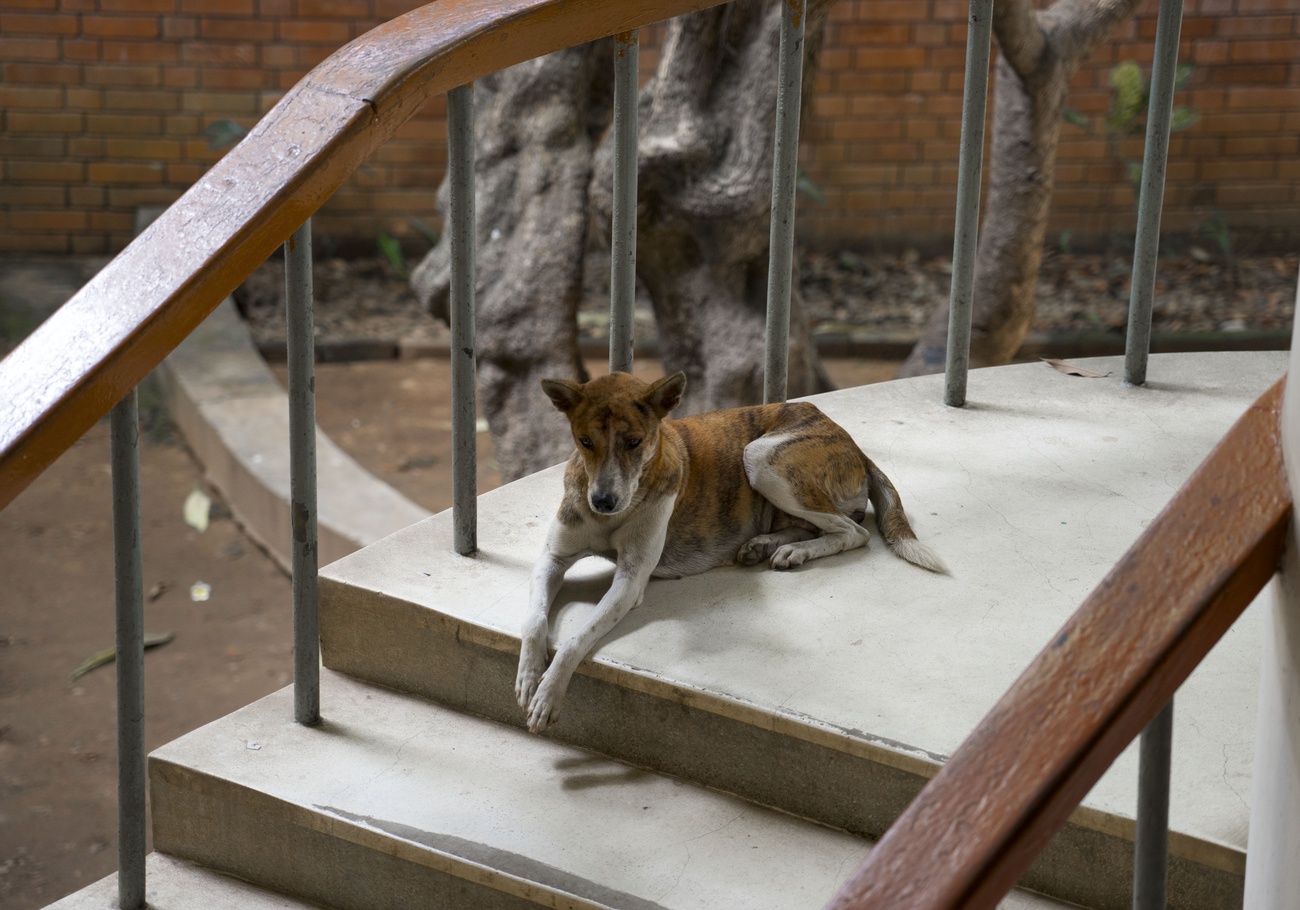 Dog Eye – taking the place of an introduction to the show of Daniel Steegmann Mangrané is the eye of a dog that has undergone a metamorphosis: it has transformed into a geometric form of in-distinct origin. The animal’s intensive gaze escapes us. Through the artist’s intervention it withdraws itself from comprehension, is broken up and scattered in all directions – giving the animal’s presence an almost ghostly appearance.

With Dog Eye the Kunsthalle Münster is presenting the first solo exhibition in a German institution of the artist, who is currently living in Brazil. His works—comprising installations, films, sound-based works, photographs, drawings, holograms and sculptures—are marked by a poetic approach of overlapping geometric and abstract forms with organic elements: branches, leaves, insects and recently also dogs serve as integral components of Daniel Steegmann Mangrané’s works. He com-bines and intertwines these to create an overall structure that subtly brings us to question our own position in the world, and thus also our attitude toward our environment. We are called upon to re-think the prevailing western perception based on binary thinking, in terms of subject and object, nature and culture.

Significant to Steegmann Mangrané’s artistic practice is, among others, the philosophy of the Brazilian anthropologist Eduardo Viveiros de Castro (born 1951), who is known, in addition to the idea of “the decolonization of thought”, for his concept of multinaturalist perspectivism, based on the indigenous peoples of America’s belief that everything is either human or animistic. The artist is concerned with finding a visual mode of expression for these thoughts.

The exhibition at the Kunsthalle Münster assembles more recent and older works by Daniel Steegman Mangrané. Centred around the two films, Fog Dog (2019/2020) and Phasmides (2012), arises a network of artworks involving a wide range of media. This survey illustrates the artist’s interest in versatile forms of perception. In addition to placing great importance on the format of the exhibition, his approach is influenced by the neo-concrete movement emerging in Brazil between the late 1950s and early 1960s. Accordingly, he integrates the recipients’ physical experience directly into his works and thus triggers a process of democratization in the experience of art. Curator: Merle Radtke

Daniel Steegmann Mangrané (born 1977 in Barcelona) has lived and worked in Rio de Janeiro since 2004. In his works he thinks through and/or with form, for which he draws from a diversity of media comprising photography, drawing, sculpture, sound, installation, hologram and film. At the same time, one finds various references to the tradition of geometric abstraction by representatives of the neo-concrete movement such as Hélio Oiticica and Lygia Clark, whose pioneering work in the second half of the 20th century called for replacing the beholders’ mere observation of art works with their complete involvement. Daniel Steegmann Mangrané’s works have been shown internationally in solo and group shows at numerous institutions, including Pirelli HangarBicocca, Milan (2019), Nottingham Contemporary (2019), the Institut d’Art Contemporain, Villeur-banne/Rhône-Alpes (2019), the CCS Bard College, New York (2018), the Fundação de Serralves, Porto (2017), the 14th Lyon Biennale (2017), the 9th Berlin Biennale (2016), the New Museum Triennial, New York (2015), the Museu de Arte Moderna, Rio de Janeiro (2015), the CRAC Alsace Centre Rhénan d’Art Contemporain, Altkirch (2014), the Casa França-Brasil, Rio de Janeiro (2013), the 9th Mercosul Biennale, Porto Alegre (2013) and the 30th São Paulo Biennale (2012).