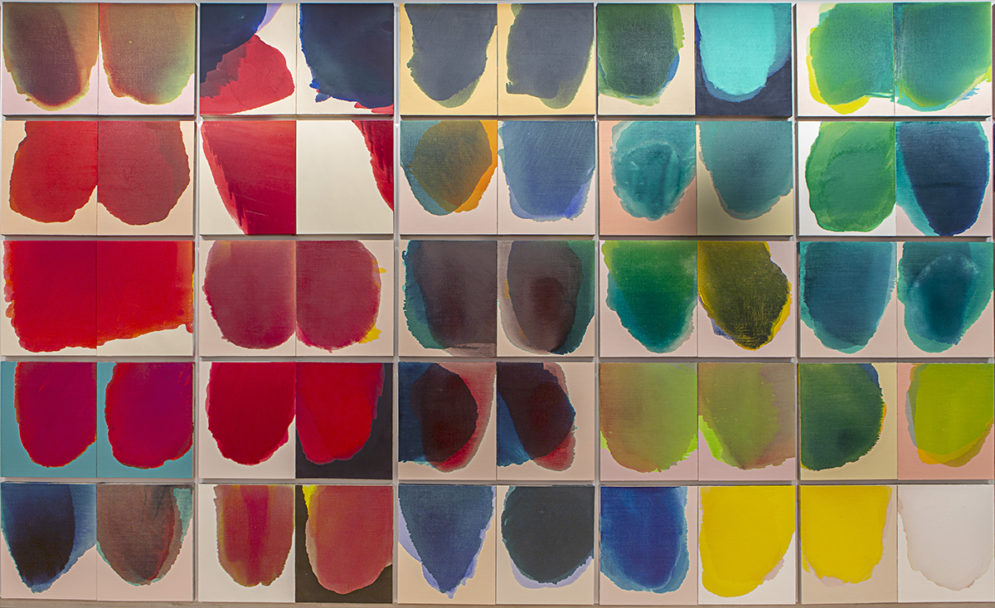 Exhibition Rubén Rodrigo The Light and the Fury is Rubén Rodrigo’s ­rst solo exhibition (Salamanca, 1980) at the Fernando Pradilla Gallery. With such a suggestive statement and creating a paraphrase of the original title in English of William Faulkner’s novel “The Sound and the Fury”, the artist exhibits a set of canvases in which he seeks to arouse the immateriality of the pictorial atmospheres, enhanced by the action of colour and light. It is those ­elds of color fused with each other by the tonal degradations and the contamination of their contours that give Rubén Rodrigo’s works that kind of indeterminate, almost evanescent spatial modulation that manages to sensorically involve the viewer, suspended in a chromatic veil. The exhibition that is now shown in our rooms is preceded by a more extensive presentation at the DA2 Domus Artium in Salamanca, which was curated by Carlos Triguero Mori. As there, the selection of works groups oils of recent production of small and large format, and this time incorporates a series of collages in which the artist “under a poetic of the residual uses pieces of paint torn from different supports”, maintaining the care in detail and the plastic keys that characterize it.

In Rubén Rodrigo’s work there is no friction between chance and control, his hybridization is complete, and so the artist expresses it: “In my work there has always been a tendency towards improvisation and the search for the sublime through processes in which a certain controlled chance intervenes. This chance, the mystery and a certain tactile quality, always related to lightness, have been present in my work from the beginning. I am currently exploring the formal possibilities of colour in practically monochromatic ­elds. I want to reach the maximum purity by means of a unique stain process allowing the paint, in a very liquid state, to drip down the surface of the canvas, generating a vibration that varies according to the luminosity of the background or its chromatic interaction “. Ellipses, pauses, restraint, time and shadow become aesthetic categories in which Rodrigo supports his work, a whole palette of decreasing nuances that build the chromatic masses of his canvases. Rubén Rodrigo has a degree in Fine Arts from the University of Salamanca since 2004, when he began to exhibit his work in individual and collective exhibitions in different cities and Spanish institutions such as the aforementioned DA2 of Salamanca, the University of Granada, the Fundación Antonio Gala de Córdoba and La Fábrica de Madrid, among others. Among the acknowledgments obtained by Rubén Rodrigo are the 2016 VEGAP Proposals prize of the XX Call for Helps for Visual Creation, the Antonio Gala Foundation for Young Creators 2005-2006 scholarship, the First Prize in the 7th edition of the San Prize Marcos of the University of Fine Arts of Salamanca, among others. His work is in different private and public collections such as the University of Fine Arts of Salamanca, the Mondariz-Balneario Foundation, the Móstoles City Council, the Contemporary Art Fund of the University of Granada, the IbercajaLa Rioja Foundation, the City Council of Salamanca, the Gaceta Foundation, the Patrimonial Fund of the University of Salamanca and the Ibercaja-Zaragoza Foundation. (Fernando Pradilla press-release)