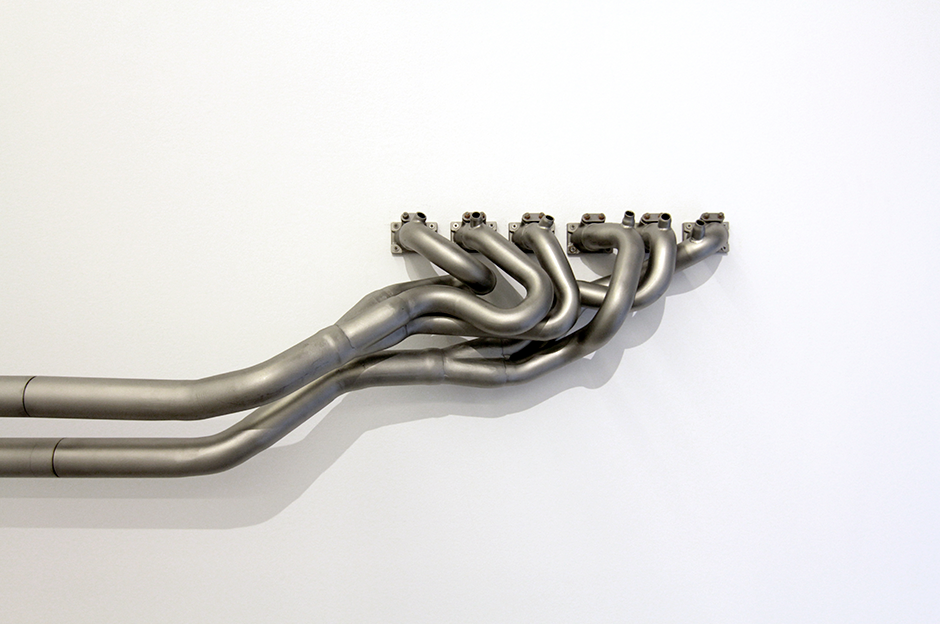 ”A beaver’s DNA doesn’t stop expressing itself at the end of its whiskers, but at the edge of its dam,” writes the ecological theorist Timothy Morton. What if the physics of entropy was sliding between humans and objects through pure inertia? What if an engine’s exhaust pipe- the piece that directs the smoke from the inside of the car to the outside- as a piece of engineering owes its nature to an organic order imprinted on the entrails of its creator? What is the relationship between a glottis and a ramble, between a city and a puddle?

In the context of this second exhibition by Carlos Irijalba in the gallery, the endotic points to the interrelations of the human being and his environment. There is no difference between the human being and nature, between inside and outside. Language separates us but the exotic is within ourselves. Like the objects and structures that we produce, an important part of our constitution, as with all multicellular mammals, is formed by carbon. These objects carry with them biological designs that we can interpret as a secretion that isn’t always conscious, an unformed trace, ﬂuid, open to an unforeseen evolution. Genetic material duplicates and mutates not only at the biological level, but also in the strategies and tools with which, consciously, we give form to a new landscape. These dynamic parallels are not obvious; they happen at different rhythms and scales.

This exhibitions highlights the convergence of those dissonances as a means to approach the transitory states of matter. We observe the solid, liquid, and gaseous states as relative and symptomatic of the heterogeneous interrelations between what is tangible and intangible, fertile and sterile, and the blurry lines between what is animate and inert.

Carlos Irijalba (Pamplona, 1979) former resident at the Rijksakademie of Amsterdam 2013/2014, Graduated at the Basque Country University and UDK Berlin en 2004. Awarded with the Guggenheim Bilbao Photography Grant in 2003 and the Marcelino Botín Art Grant in 2007/08 also received the Mondriaan Beweize Talent (Holanda) and the Shifting Foundation Grant (EEUU) among others. Irijalba has exhibited at international Art Museums, including the MUMA Melbourne, LMCC New York, Fundacion Cerezales, Museo MUSAC in Spain or Guangzhou Triennial. (MPA press-release)