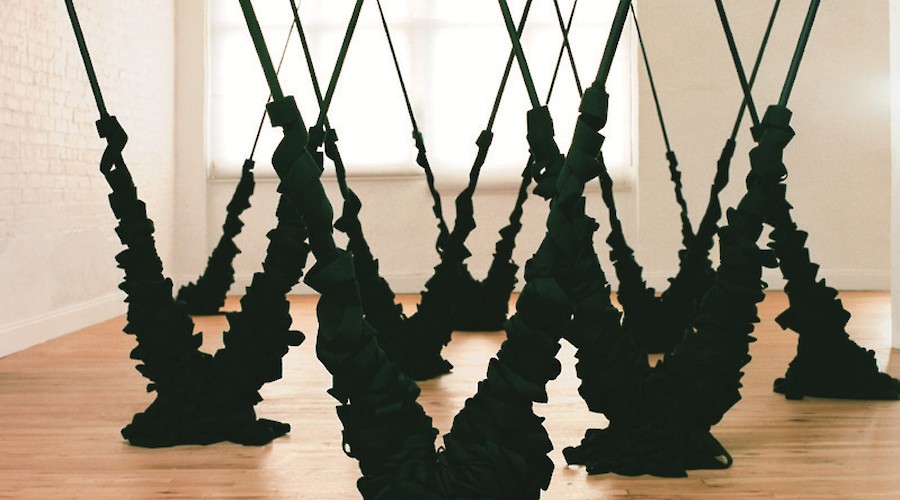 The exhibition features printed photographs from Arturo Steele’s “almosthere” series and sculptural work from the “unfold” series by Guillermo Rodríguez.

Steele and Rodríguez, both born and raised in Spain, have never crossed paths before. Their work, however, speaks to each other, exploring the underlying nature what drives a balanced yet dynamic existence.

Almosthere represents the psychosomatic state of stability. The 90 degree angle that promises contentment but ultimately falls into the static and sedentary, at odds with creativity and animal existence. A slight variation above or below those 90 degrees will be enough to exit the equilibrium, fueling exploration and ultimately creating vital experiences. Within this impasse we find forms which, in the solitude of the XXI century, look to explore their surroundings, following the stimulus and bursting in and out of that equilibrium, helping retain the promise of stability.

Arturo Steele is a visual artist based in Los Angeles. After finishing his Fine Arts degree in Madrid, Steele moved to Berlin, where he began his artistic career as an assistant for internationally known artist and filmmaker Julian Rosefeldt. For almost a decade, Steele dived into the creative environment of Germany’s metropolis, which led to several collaborations between Steele and other artists also living in the city. His work, which often deals with environmental issues and the paradox of human isolation in vastly crowded contemporary cities, has been exhibited in Berlin and Madrid.

Unfold explores the degree of appearance and fiction hidden behind certain everyday objects and their resilience to transcend the intent for which they were initially designed for. By doing so, these objects acquire new meanings that underscore their singularities and inherent characteristics, invoking an emotional response capable of grasping the notion of transcendence and the impulse in which one wishes to see himself reflected.

Rodríguez is a New York-based artist, formerly a graphic and interior designer. His work uses mundane objects to create sculptures and installations that reveal new meanings. His process follows an ascending spiral of non-intent, uncertainty and paradox that plays a game of opposites. His work has been exhibited in multiple group shows such as Creació Jove 2000 (Barcelona), Mostra Union Fenosa 2001’ (A Coruña), Espacio Valverde Gallery (Madrid, 2006). His first solo project, Drawing the Landscape, (Oviedo, 2000), was exhibited in three cities. More recently, Rodríguez opened his studio doors during the 2019 Bushwick Open Studios (Brooklyn) to showcase pieces of his latest Unfold series.