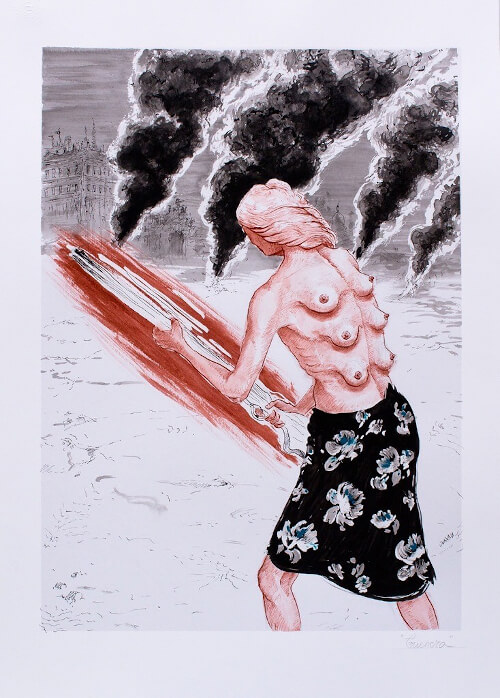 Galerie 100 Kubik opens its new exhibition with the promising title Wild Tales, which brings together works by the two successful Spanish artists Juana González (*1972, Ciudad Real) and Silvia Lermo (*1986, Cádiz). The paintings contrast with each other and are accompanied by written stories, so the exhibition promises a new experience: the combination of written narrative with the complex pictorial narratives of both artists.

For the first time, paintings by the artist Juana González, who is already well established in Spain and France, will be presented in Germany. Her work is characterized by strong colors and an extreme and daring brushstroke. There is a clear preference for the somber and mysterious, as well as for theatrical compositions. “I always try to maintain the unknown and create states of confusion and uncertainty”. This affirmation of the artist defines very well her works, which fascinate and disturb at the same time. But above all, she invites the spectator to decipher the narratives or narrative fragments represented or to complete them himself.

In contrast to this, there are the paintings of the young emerging artist Silvia Lermo, which stand in rather sober colours. Her works on paper are based on autobiographical memories of her childhood and youth. They are poetic reflections of a past that makes its way into the present and rewrites its history. She creates timeless spaces, scenarios in which day and night are barely distinguishable from each other, in which she places her very personal stories. By reducing the palette to minimum elements and using diffused light, she achieves the greatest expressiveness and creates an atmosphere from which the viewer can hardly escape.

The combination of the image with the written narrative in this exhibition offers the viewer a new approach to the works of art, which contain thousands of different stories. Everyone can use their own imagination and intensive observation of the works to complete their “Wild Tales”.