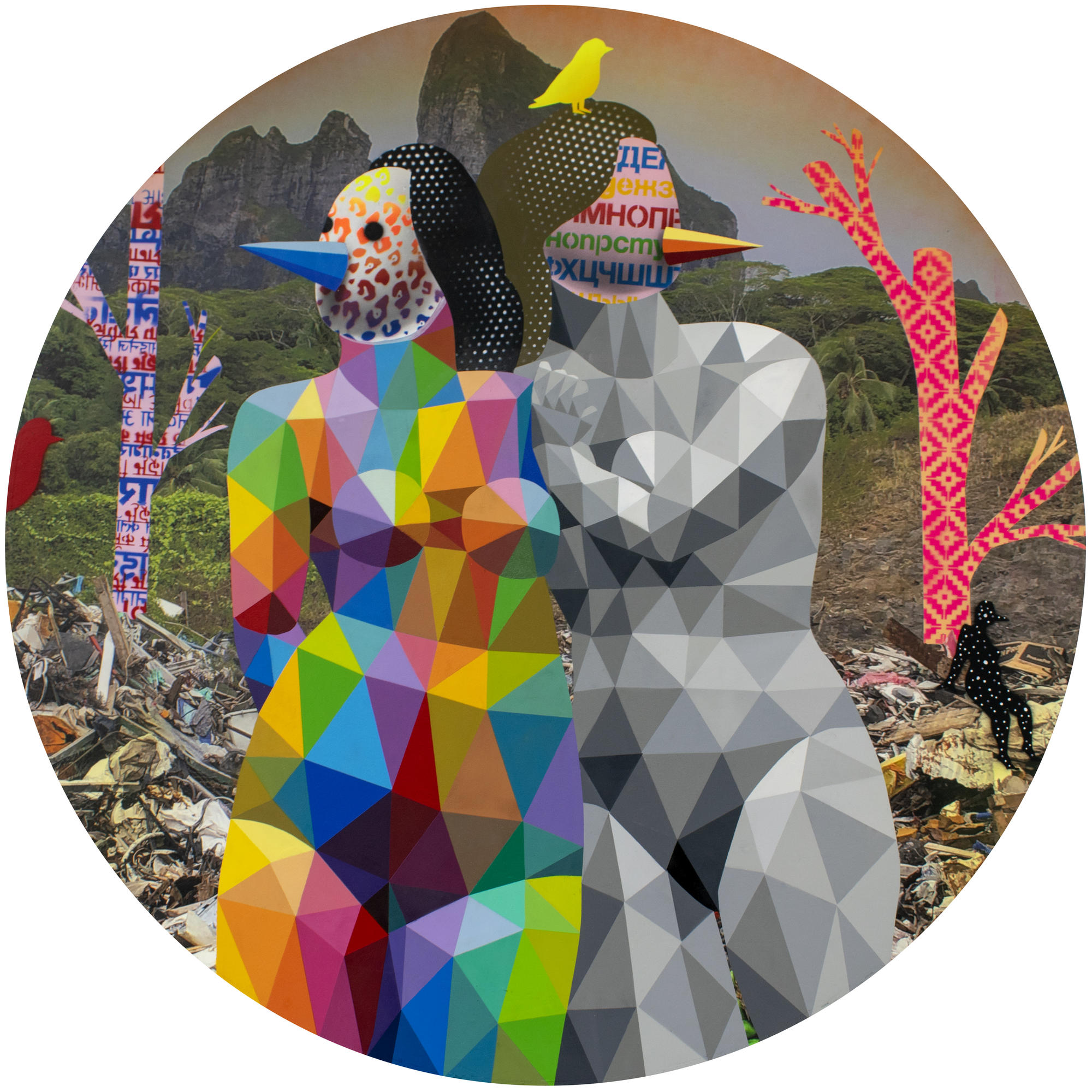 Once it has reached our lives and begun to be received with open arms we fear it will not be easy for us to get rid of plastics. As useful as they are toxic in the long term, they have become omnipresent and it seems impossible to imagine life without them. We find them at home, on the street, and increasingly in our seas and rivers.

As if it were not already with us and its consequences were not affecting us, the plastic islands in our oceans grow at the expense of our waste. They are becoming a threat to the ecosystem, causing risks to our health and leading to economic and moral ruin.

Starting from this prerogative, Okuda San Miguel proposes to visit through his new exhibition a dystopia with which, unfortunately we seem increasingly comfortable.

Can you imagine spending your holidays in an authentic dump on the sea? What may seem the fantasy of a twisted mind, in the not too distant future may be a reality: “The plastic island” as a tourist destination. Throw the towel over the plastic glomerate and ask for a microplastic daiquiri, in these new works we will see each other not so far from now…

In “The plastic island”, Okuda has relocated the characters with whom he has traditionally given life to his creations. Far from the context in which they use to live, now they become part of a landscape of plastics on which the only thing that stands out is a few meager palm trees. And to which a new species has been added, a hybrid of human and plastic, fruit of our passion for PVC.

Born in Santander,Spain, Okuda San Miguel lives and works in Madrid, graduated with a Bachelor’s degree in Fine Arts from Madrid’s Complutense University. His unique iconographic language of multicolored geometric structures and patterns on the streets, railroads and abandoned factories around the globe have made him one of the world’s most recognizable street artists of today. Highly sought after for large scale projects, Okuda is perhaps best known for his conversion of an abandoned Spanish church aptly named Kaos Temple, which has become a new icon of contemporary art.

Parallel to his work outdoors, in 2009 Okuda started his own studio practice and his fine art has been exhibited in galleries from India, Mali, Mozambique, United States, Japan, Chile, Brazil, Peru, South Africa, Mexico and the European continent among others. In his work, rainbow geometric architectures blend with organic shapes, bodies without identity, headless animals and symbols that encourage reflection in artistic pieces that could be categorized as Pop Surrealism with a clear essence of street forms. His works often raise questions about existentialism, the universe, the infinite, the meaning of life, and the contradictions of the false freedom of capitalism, showing a conflict between modernity and our roots; ultimately, between man and the same.

Okuda’s distinctive style of geometric harmonies emboldened with intense colors can make his artworks feel like they’re from a parallel universe. His large-scale murals and street sculptures can be found dominating parks and squares in towns around the world. Okuda’s mixed media approach to works on canvas and paper is diverse with elements of embroidery, collage and wood, highlighting his insatiable thirst for creation and multitalented ability.(Mirus gallery press-release)