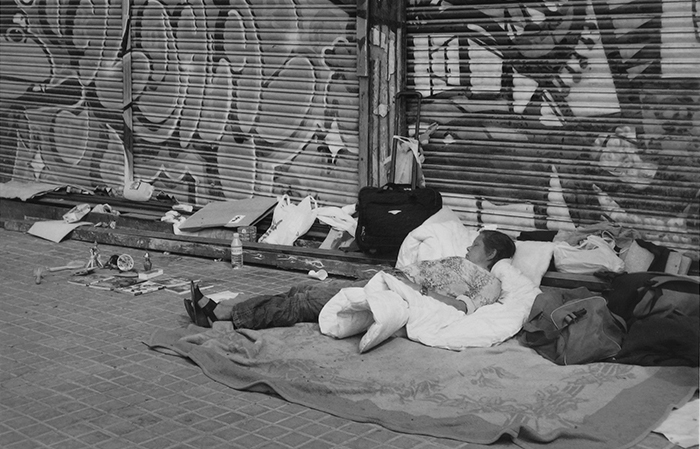 The exhibition provides a follow-up of the transformation process of the Plaza de la Gardunya between the beginning of 2005 and the spring of 2018. Or rather, from 2018 to 2005, that is, as a reverse chronology, from the present to the past.

Obviously, the idea of a progressive and temporal organization is inspired by Walter Benjamin’s “angel of history”. It begins with the beginning of the course at the new Escola Massana and the arrival of the new inhabitants to the flats in 2017 and 2018, and ends with the oldest images of the back of the market in 2005.

The script of this urban process is well known: once again, it is an artistic institution, in this case the Escola Massana, determining an urban development operation of interior reform in the Raval, according to the logic of the old “Seminari al Liceu” plan. In addition, the project documents the transformation of the Boqueria market and its surroundings due to growing tourism pressure, the shift from traditional trade and local consumption to a new gastronomic consumer economy and mass tourism.

The itinerary through the rooms resembles an archaeological excavation that reveals the geological strata and the remains of previous lives. The route is not only chronological, but also thematic, in the form of micro-studies: the tourist reconversion of the market, the history of the square including the convent of Santa Maria de Jerusalem or the Academy of Medicine and the Corralet, the Escola Massana and the transit from the old to the new headquarters, the construction of the flats, etc. Also included are photographs, publications and historical documents that complement and dialogue with the artist’s proposal.

Jorge Ribalta (Barcelona, 1963) is an artist, researcher and independent curator.

This work is part of a series of photographs taken by Jorge Ribalta in the last decade and whose link would be the representation of Barcelona after the Forum of Cultures 2004, the last major urban planning operation in our city. Some of these groups are, among others, Trabajo anónimo (2005), about the last metallurgical industry in Can Ricart; Sur l’herbe (2005-2008), about the audience of the Sónar festival; Futurismo (2011), about the landscapes of the new/old economy in the 22@ district; 1888 (2016), about the remains of the Universal Exhibition of Barcelona in 1888, and Litoral (2017), about the environment of El Prat airport during its extension. Curator: Valentín Roma. (La Virreina press-release)