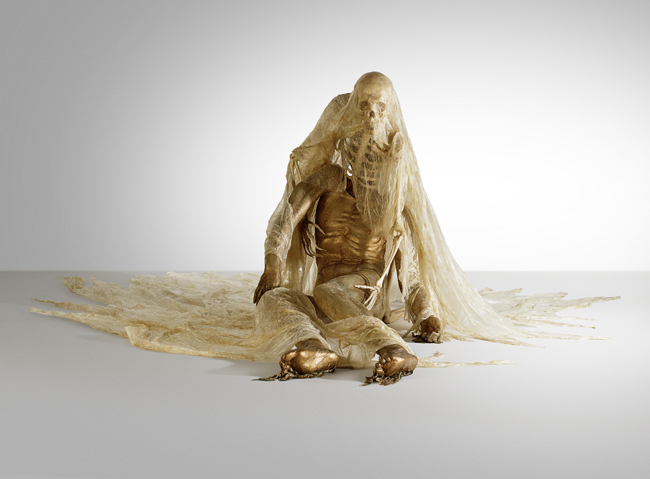 The exhibition brings together part of his most recent production, which includes sculptures and drawings, most of which are unpublished in Spain.
With a particular cyclical vision of time, in which life and death are only two stages within the permanent transformation, Javier Pérez emphasizes and poetically challenges the fragile line between paradigmatically antithetical concepts such as attraction and rejection, interior and exterior, opacity and transparency, carnality and spirituality, or life and death, invading the exhibition space with a disturbing and disturbing, but no less hopeful, burden of fragility.
“Time is the substance of which I am made. Time is a river that takes me, but I am the river,” wrote Jorge Luis Borges. Javier Pérez seems to pick up the message and also gives himself to the vital flow of Nature as a means to show his concerns and reflections about the passage of time. “I’m interested in the ambiguity of certain forms. There is a familiarity between the animal and the plant; both are determined by the same implacable law: they only exist in a state of constant transformation,” says Javier Pérez.
Hybrids of impossible shapes and apparently barren branches make up the series of bronze latent Life (2016) and Outbreaks I-II-III (2017), in which the plant, animal and mineral merge to show themselves without modesty as carriers of latent life.
Branches of peach trees, stoic olive trees or almond trees in bloom, sprout from beating hearts in a violent explosion of renewed life, highlighting, as in the series of drawings Sources of Life (2016), the transience of all living beings, as well as their responsibility and commitment during this short and fleeting transit.
Mother (2014) is about the close and intimate connection between life and death. The mother surrounds her child’s inert body with a selfless and tender embrace, bending over and covering it in a protective way with her own skin/placenta in the form of a cloak. However, in this case, the mother is not the giver of life, but the very embodiment of death. In a revisited reading of the religious iconography, the Mother, as in an inverted birth, gathers and accepts in her womb what was denied her at the moment of conception.
The sculptural exhibition is completed with Un solo latido (2015), a metaphor about the desire and vulnerability of the human being in the face of love or lack of love and Mask of seduction (2008) with which the artist challenges the spectator questioning the concepts of identity and otherness.
Drawing has been a constant discipline in Javier Pérez’s artistic career and his creations are part of important collections of international prestige, among them the Centre Pompidou’s with more than a hundred of his drawings. In the artist’s words:

“…the pencil is thinner than a hair, it must work by accumulation. An obsessive, primary gesture reminiscent of silkworms wrapping themselves to create volumes that close. We are thus faced with a mysterious interior in full metamorphosis. I like to approach those perfections of nature, even if they become a sophisticated act….”.
The series Lapsus (2017), Revelations II (2017) and Revelations III (2018) are a challenge to your own physical and emotional state: sharp, penetrating and light ink, paper soaked to the core, insistent, obsessive, obsessive gesture, immediate slip arising from the subconscious, without interruption, horizontally, in a meditative state and close to the ground as if tracking through your own obsessions.
The drawings are configured as musical “pneumograms”, scores in which the harmony is given by the multiplication and superimposition of layers and the rhythm by the rhythm of the frequency of their breathing until the organic appearance of random melodies. (Carles Taché press-release)