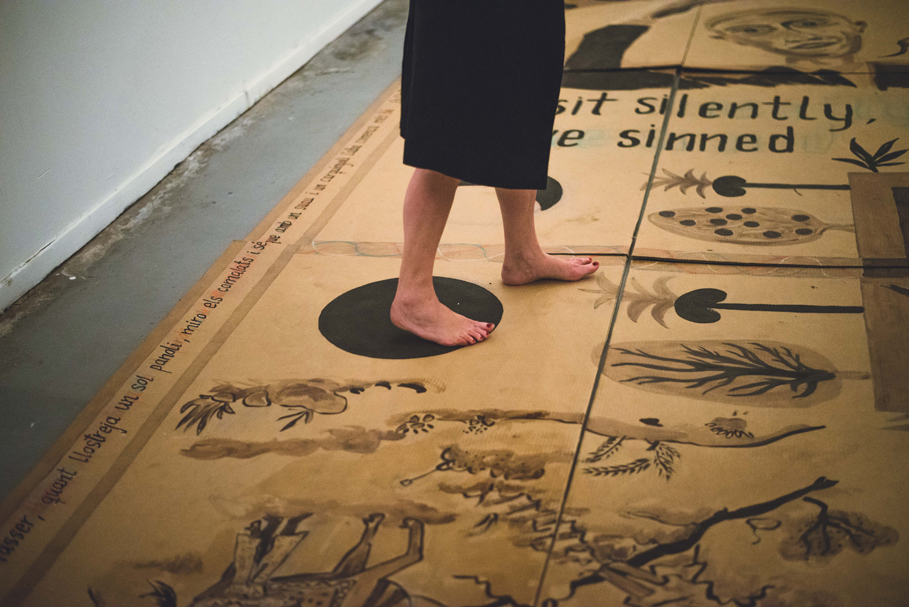 Tere Recarens was born in 1967 in Arbùcies, Girona. Her woks have to do with moving, the turmoil it sometimes infers. Most of them are answers to precise contexts: Tere Recarens, by choice or necessity, can be brought to react to a situation, she often tries to twist. Each answer is based on the attentive observation of the context and the customs, and often demands investigation over time. In this way, meeting other people is decisive; it can lead to new knowledge, induce any project, any research. Tere Recarens’art is like the video of this sailboat jostled by waves, but trying to keep its course, its quest (Adventure, 2008-2016). Tere Recarens has lived and worked in various countries. However, for her, travelling is not an end in itself: it is the means, among others, to go on searching. For her exhibition at gallery Anne Barrault, she has chosen to show two works resulting from several stays in Iran and her studying the history and culture of this country: Baharestan Carpet (2017-2018), a cardboard carpet, and Spark (2015-2017), patterns on paper.

BAHARESTAN CARPET is a cardboard carpet. “Baharestan”, meaning “where spring is” is the most common name in Teheran for the legendary carpet, decking Ctesiphon palace, under Khosro 1st (531-579) in Sassanid time. It is known through descriptions, which have inspired many artists. Baharestan Carpet was presented in Barcelona in 2017. In Paris , it is shown with new graphic productions at the back. Its pattern is a garden divided into four parts with three themes: Persian literature, mythology, political Iranian history and women’s place. Its iconography and its style are based on different visual sources. The parts are organized around a central pond filled with birds.

SPARK is a set of eight impressions on paper, a study of boteh jegheh, better known as boteh motifs or paisley. “Spark” combines three successive printing processes. This long gestation in elaborating the work is due to the quest of the history of this motif. The boteh jegheh is full of political, religious and at the same time does not move; she flies without covering any distance; she comes nearer, however has travelled no space. Know that all colors come from Simorgh, but Simorgh herself has no color. Her nest is in the East, but her place in the West is not empty. She concerns everyone, but she is empty of all. What we know comes from this Simorgh ‘s incantation.”3. (Annae Barrault press-release)