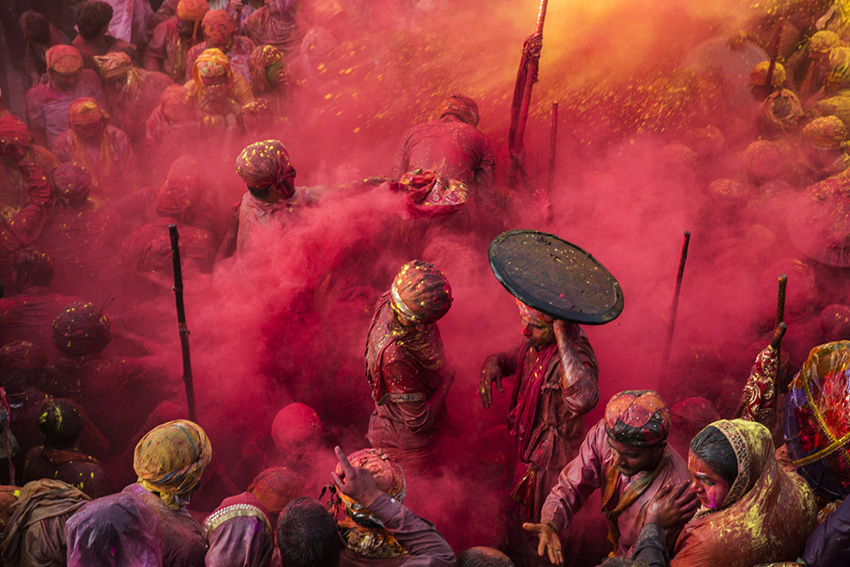 Holi is the festival of color that is celebrated throughout India and which commemorates the beginning of spring, the ending of the harvest as well as the triumph of good against evil.

The young throw around powders of different colors to wish each other love, fortune and vitality whilst dancing and singing in the streets and temples.

In the north of India Rada’s divine love for Krishna is celebrated.

The women pretend to hit the men who protect themselves with shields to recreate the goddess’ anger against Krishna’s mischief.

Cristina García Rodero was born in Puertollano, Spain 1949. She studied painting at the School of Fine Arts at the University of Madrid, before taking up photography. She then qualified as a teacher and worked full-time in education. For the next 16 years, she also dedicated her time to researching and photographing popular and traditional festivities – religious and pagan – principally in Spain but also across Mediterranean Europe. This project culminated in her book España Oculta published in 1989, which won the “Book of the Year Award” at the Arles Festival of Photography.

The same year, García Rodero also won the prestigious W. Eugene Smith Foundation Prize. The documentary and ethnological value of her work is considerable, but the esthetic quality of her photography makes it more than a simple visual record.

In recent years, García Rodero has traveled around the world in search of other cultures with particular traditions. Over a period of four years, she went several times to Haiti, where she has documented voodoo rituals, producing a series of expressive portraits and moving scenes flanked by engaging documentary observations. Rituals in Haiti was shown for the first time in the 2001 Venice Biennale.

Cristina García Rodero has received many prizes, including the Premio Nacional de Fotografía in 1996 in Spain. Her work has been widely published and exhibited internationally. She has published several books and has been a member of the agency Vu for more than 15 years. Garcia Rodero joined Magnum in 2005 and became a full member in 2009.