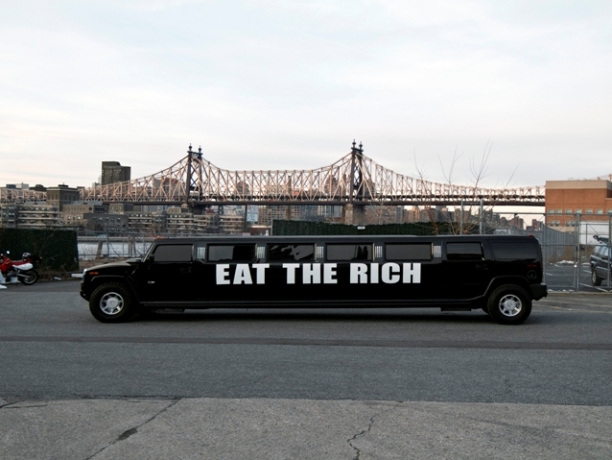 “When the people shall have nothing more to eat, they will eat the rich.”Jean-Jacques Rousseau.

Based in Madrid, DEMOCRACIA collaborate on large-scale interventions, politicising spaces and situations through the apparatus of propaganda.

Filmed between Dublin, Houston and London, ORDER moves between out-of-town shopping malls, open-carry demonstrations and lavish dinners, to present in its melodrama the historic antagonisms of the oppressors and the oppressed.

Presented as film and installation, ORDER is a three part opera that seeks to radically critique the conventions and injustices of capitalism. The artwork presents in its three acts – Eat the Rich/Kill the Poor; Jeremiah; and Dinner at the Dorchester – dramaticised analogues of our reality through carefully engineered interventions in public and private spaces.

By shifting the production away from the constrictions of the theatrical medium and its bourgeois environment, ORDER violently disrupts the cultural grammar of opera. DEMOCRACIA use this art form as a tool with which the ruling classes may be pilloried, lambasted and held to account.

The libretto of ORDER is inspired by Hesiod’s didactic poem Works & Days, in particular, its telling of the Myth of Five Ages. Believed to have been written during the Ancient Greek agrarian crisis, a time of colonial expansion, debt-slavery and class war, Works & Days bears stark correlations to our present context. In this passage, Hesiod details the “race of iron”, an age where “men never rest from labour and sorrow by day, and from perishing by night”; an age in which “men will praise the evil-doer and his violent dealing”. DEMOCRACIA seize the central premise of Hesiod’s poem and transform it into a scathing discourse on the ills of contemporary society. (Rua red press-release)

The Spanish artists’ collective DEMOCRACIA was set up in Madrid in 2006 and comprises the two artists Iván López and Pablo España. Their decision to work as a group fosters an artistic approach that is geared towards discussion and the clash of ideas and means of expression. Not only that, but the fact that they work as a group engenders an interest in stepping into social spheres with a view to highlighting the revolutionary potential of everyday activities. Since its inception, the collective has been a resounding international success and its works were featured at biennial arts festivals in Istanbul, Gothenburg, Taipei and Havana (to name but a few), along with numerous exhibitions in Europe, Asia and the USA. Democracia is also the publisher of the art magazine Nolens Volens