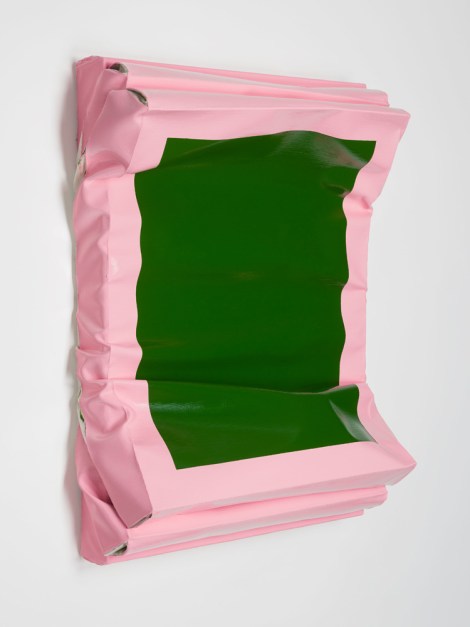 In her works, Ángela de la Cruz, who was born in Spain in 1965, puts the structural qualities of painting into question by liberating them from their two-dimensional existence. Canvases and stretcher frames are cut, torn, and broken for this purpose and emerge as objects that challenge their categorization as painting. De la Cruz thus—literally and quite brutally—detaches the idea of the picture from its physical carrier as well as from tradition: “The moment I cut through the canvas I get rid of the grandiosity of painting.”

The exhibition presents four large-format works in red/brilliant pink, ultramarine blue/light blue, titanium white/off white and cadmium yellow/light yellow. Each of them consists of three superimposed layers of canvas, each painted with a square and a border in one of the four color combinations. In the same minimalist aesthetic, a small, simple portrait format hangs in ultramarine blue/light blue in the Window Space. Here too, the canvas falls wrinkled from the frame and reveals a further glossy layer, as if the canvas was constantly reproducing itself, renewing itself, healing itself; a simultaneous representation or a metamorphosis, so to speak, of the picture’s creation, which is conceptually significant for Angela de la Cruz.

But at the outset of every painting there is always a narrative, which is naturally also important in the conception of an exhibition. “There is always a narrative when I approach my exhibition. I always think about a story or situation and then articulate my work in the space accordingly.” In regards to Layers at Galerie Thomas Schulte, de la Cruz says that the exhibition should feel like a “party that was slowly fading, people leaving one by one”. As a reference she cites the film “The Day of the Triffids”, which is based on a post-apocalyptic science-fiction novel. With this series of works, she makes reference to the universal and individual, above all political uncertainty of our time. In this way, she provides a commentary on the current weakening of democracy in Britain.
Angela de la Cruz repeatedly emphasizes the narrative quality that underlies her works, both in terms of her own life and in terms of objects such as used chairs and cupboards that she integrates into her works. This is also the case with the two brown painted sculptures made of hollow aluminum forms, which are also part of the exhibition. The angular boxes from her Crates series are bent, crushed, and interlocked. Placed atop the box is a chair with noticeable wear.

Within all her work there is a clear notion of tension and violence, contrasting the artist’s contemplative and meditative painting process. De la Cruz’s works thus become a representation of materiality and body, in motion between strength and fragility; between the beautiful and the broken, tension and relaxation. It is this dynamic that keeps the works moving in different ways. “My work is an investigation, but I am not a scholar, I am an observer”. If one were to sit on the boxes, one could overlook the scenery from above.